Exclusive: Free Download Rare Music by J. Cole when he was named Therapist

First of all if you don't know J. Cole is from Fayettnam aka Da Ville aka Fayetteville, N.C. (Now you know N*gga) But before he was J. Cole he was known as the Therapist who appeared on a compilation Cd (Fayettenam Bommuhs) by All Terrain Music my homies  (Nerv Reck and Filthe Rich).

He was around 17 at the time, very lo key in the Fayettenam Hip Hop Scene at the time but on the cd he definitely showed that he would be a force in the very near future aka the J. Cole you guys know now. If you zoom in on the pic above you would see him circled in red. Now I'm not gonna front like I know J. Cole personally because I knew of him. 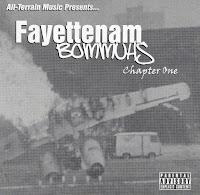 However, I'm gonna keep it real by 2002 when this CD dropped I was in South Carolina at the time but I always had an ear on the street in Fayettenam. A few proteges from my crew were also actually on that same Cd Fayettenam Bommuhs and like I said all the emcees on the CD were my lil homies. If you are from Fayettville or lived in Fayetteville in the 90's you know what mark me and my crew made on hip hop in Fayetteville hell North Carolina for that matter. This ain't about me this about a city that has so much talent that we gave you J. Cole but we have so much talent that has gone unheard. I could have you here all day. But let's get to it this is from my own personal stash I had this Cd sent to me when it first dropped (2002) and I just recently happen to stumble up on it. Anyhow I uploaded a digital copy of the Cd for you to listen to a young J. Cole (17) at the time aka Therapist. But this Cd ain't about J. Cole in my opinion it's about the other emcees on their that have gone unheard and in my opinion could drop a classic album right now just as good as Cole World if not even better but that's debateable. I do want to congratulate J. Cole because he reps Fayettenam to the fullest on his own, and I am grateful and so so proud of dude. Hopefully he never forgets his roots and where he came from, because he is standing on the shoulder of Giants and it just so happens that me and many of my closest niggas are those giants. Shouts to Bomm Sheltuh (Nerv Reck,Filthe) who gave J. Cole his break to be heard locally 'cause if they didn't I wouldn't have even heard of him. Track 6 and Track 10 are the tracks J.cole are on.... But listen to the whole cd and hear why J. Cole is so nice because he was surrounded by a whole lot of talent. Holla @ me!!

Really nice here and it is more complete and easy research. I thank you very much for those relaxing moments.

Thank you for sharing to us.there are many person searching about that now they will find enough resources by your post.I would like to join your blog anyway so please continue sharing with us.
voyance en ligne

This blog is perfect: the info is always of quality and the flawless writing is very pleasant to read.