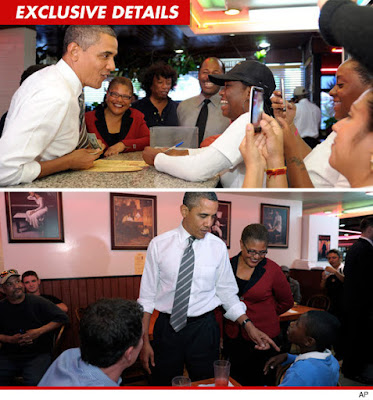 President Barack Obama was at the famous restaurant on Monday -- hitting up L.A.'s famous Roscoe's Chicken and Waffles ... in a move that made his wife and kids extremely jealous.

Obama dropped by to pick up an early dinner with his secret service -- ordering the "Country Boy" combo ... 3 chicken wings, a waffle, and potato salad ... for a fiscally responsible $8.40.

The manager said he was honored to have the Commander-in-Chief at his establishment -- but says he won't be renaming any menu items after B.O. ... in fairness to Reagan and Nixon, who were also regulars ... but don't have any items named after them. Michelle and kids weren't there -- but according to the manager, Barack insisted his wife and daughters would be stopping by Roscoe's Hollywood location in the near future ... because they're also huge fans of the restaurant.

And they thought you were falling off Barack! Please, we know you ain't forget about the hood! Also here is a video of how it looked on the outside of the restaurant. Big up to Turtleman for uploading this video!

Thank you for this site and all information abounds. I find it very interesting and I recommend it to everyone!
All the best. friendly

It`s very interesting point of view. Too much information can really confuse people. But On the other hand there are always be people who care about the others, and people who don`t. Everybody is making his or her own choice.But to know some important.
voyance gratuite en ligne

Excellent record, continue in this way

Really nice this site and besides it is complete and simple in research. I thank you very much for these moments of relaxation.

I discover by chance this blog with a whole new set of possibilities to explore.
Thank you for this conviviality in sharing.