Who's Yor Daddy? Growing up without a Dad. 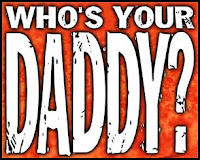 It's funny how this one line turned out to be a punchline in a joke amongst minorities. Trust me it actually comes from a hurtful place being that a large percentage of minorities grow up in a single parent home and the normal parent missing is the father. Me being an African American male understood exactly how hurtful this can be.

First of all, I have the same name as my father secondly I don't even remember what he looks like and third always had the feeling he never acknowledge me as his son even though I carry the same name. There is also anger that he left my mom, my sister and me to fend for ourselves. Just the idea I carry the name of a man I don't know but must treat him with importance because we have the same name has always been troubling to me. Also he set an early example for me to believe it was okay to make a woman believe I loved her and then abandon her once I no longer felt the need to love her regardless of the consequences. As I grew up i realized I had to figure out the dos and don'ts of relationships through trials and error. ( The more errors i made the more I learned what not to do ) But there is another side to the story as well. My sister I never looked at it from her point of view growing up without him as well. How not having him protect her from making bad choices in men could effect her relationship choices as well. Then my mom could this have a psychological effect on her as well. To be honest I never have had a candid conversation with them to find out how it effects them but I know it does. It's so funny how one man's choice not only effect the lives of his immediate family but shapes the outlook of future generations. So I ask you candidly think about this questions all jokes aside. Who's your daddy?

I found this clip from youtube it was a study on black women how they are affected in relationships growing up with no dad. Basically, the other side from a female perspective.

It is with pleasure that I look at your site; it's great. Really nice to read your nice sharing .Continuez well and thank you again.

Very useful post! It was very useful and informative. Great thanks.
voyance email

Awesome and funny! I love your presentation!

I love this blog, there are plenty of great ideas!